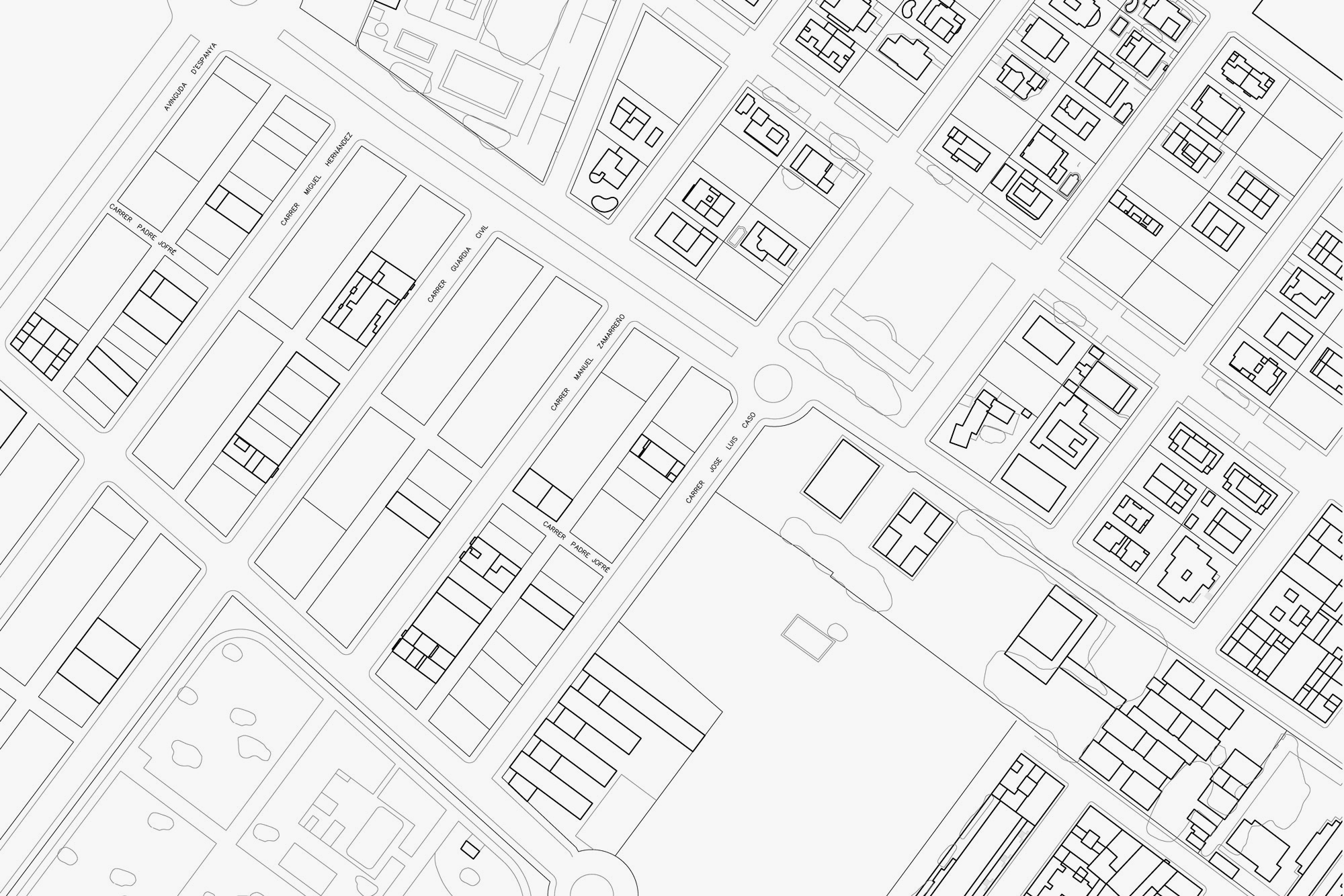 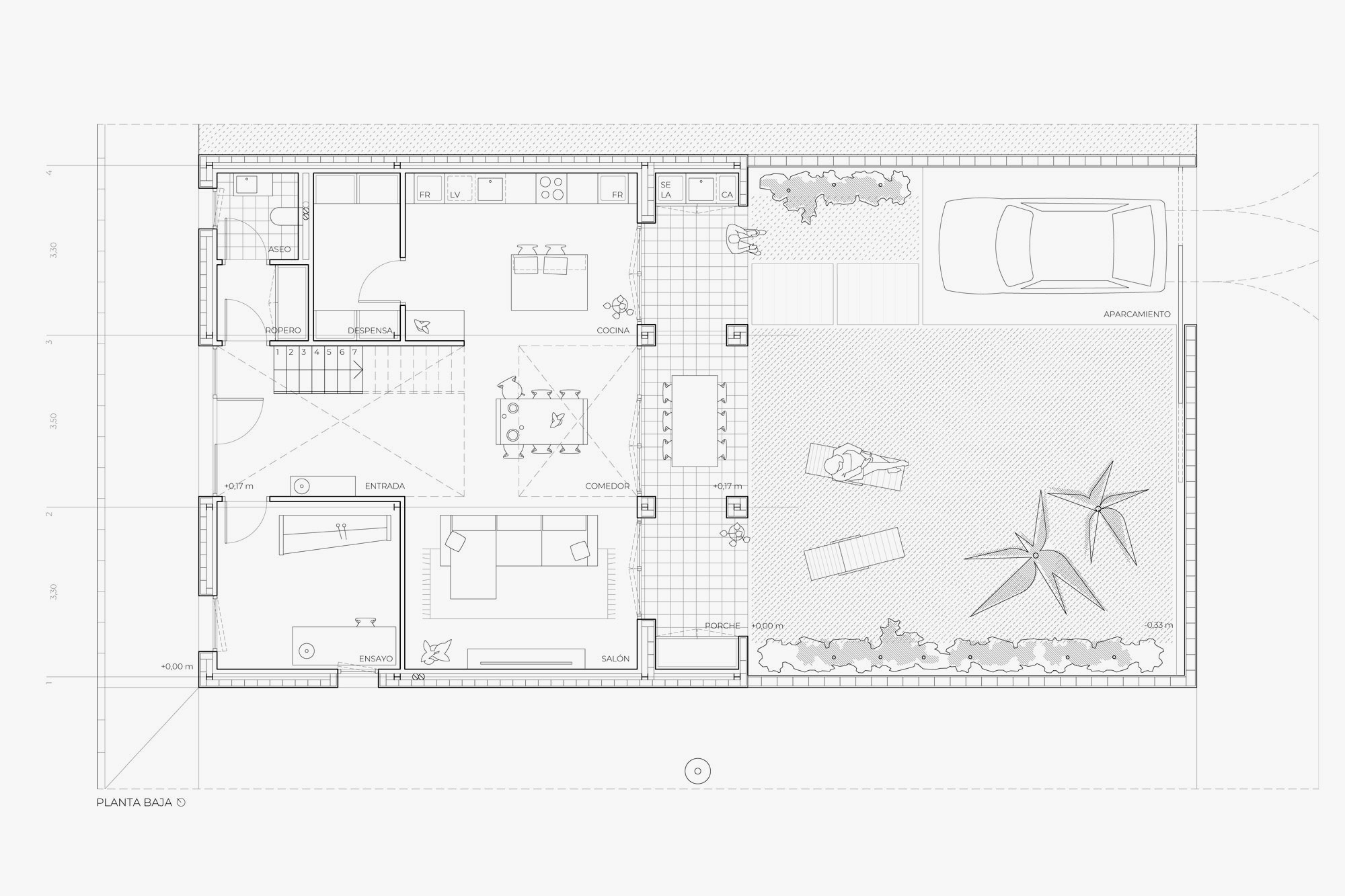 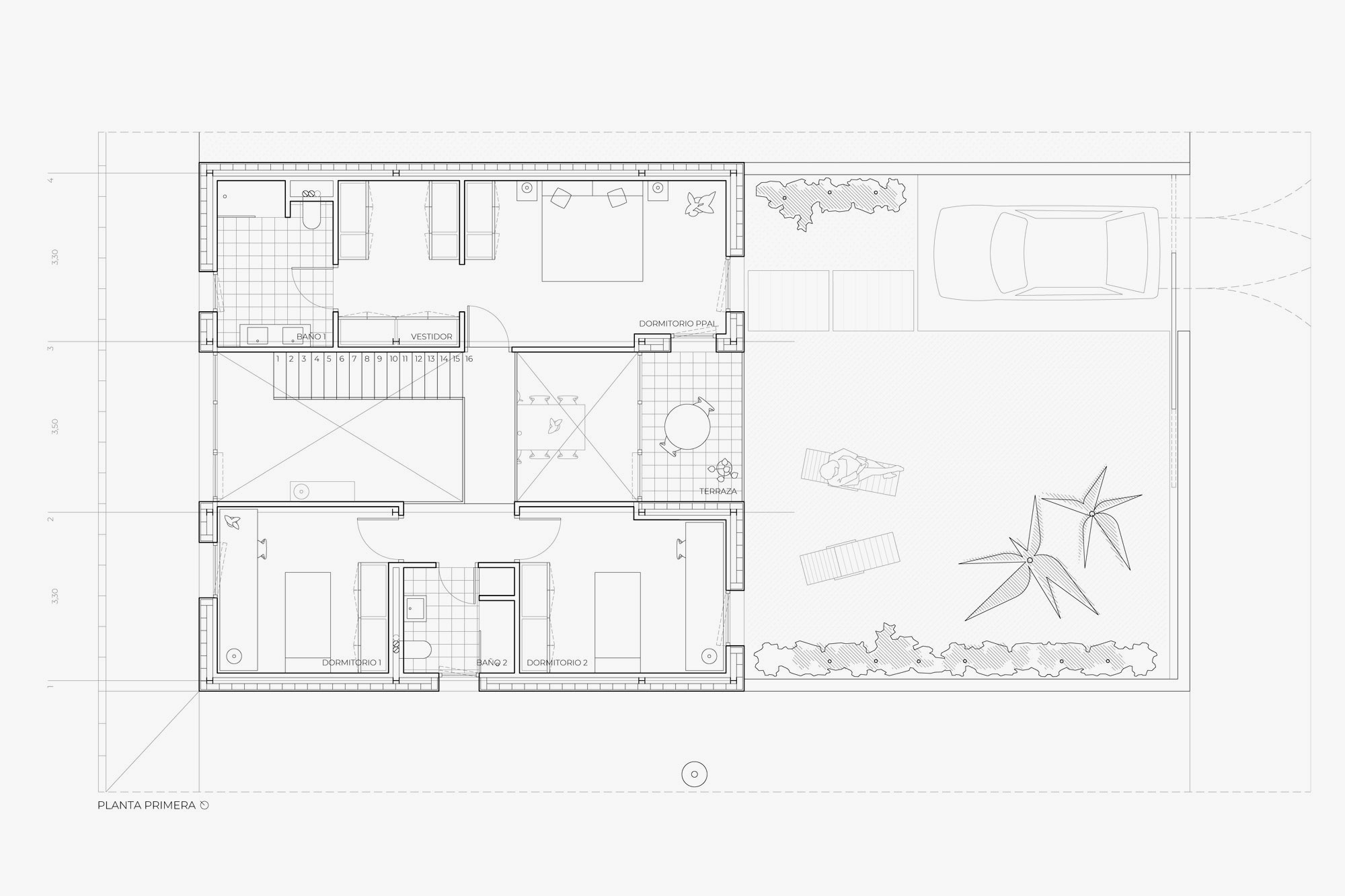 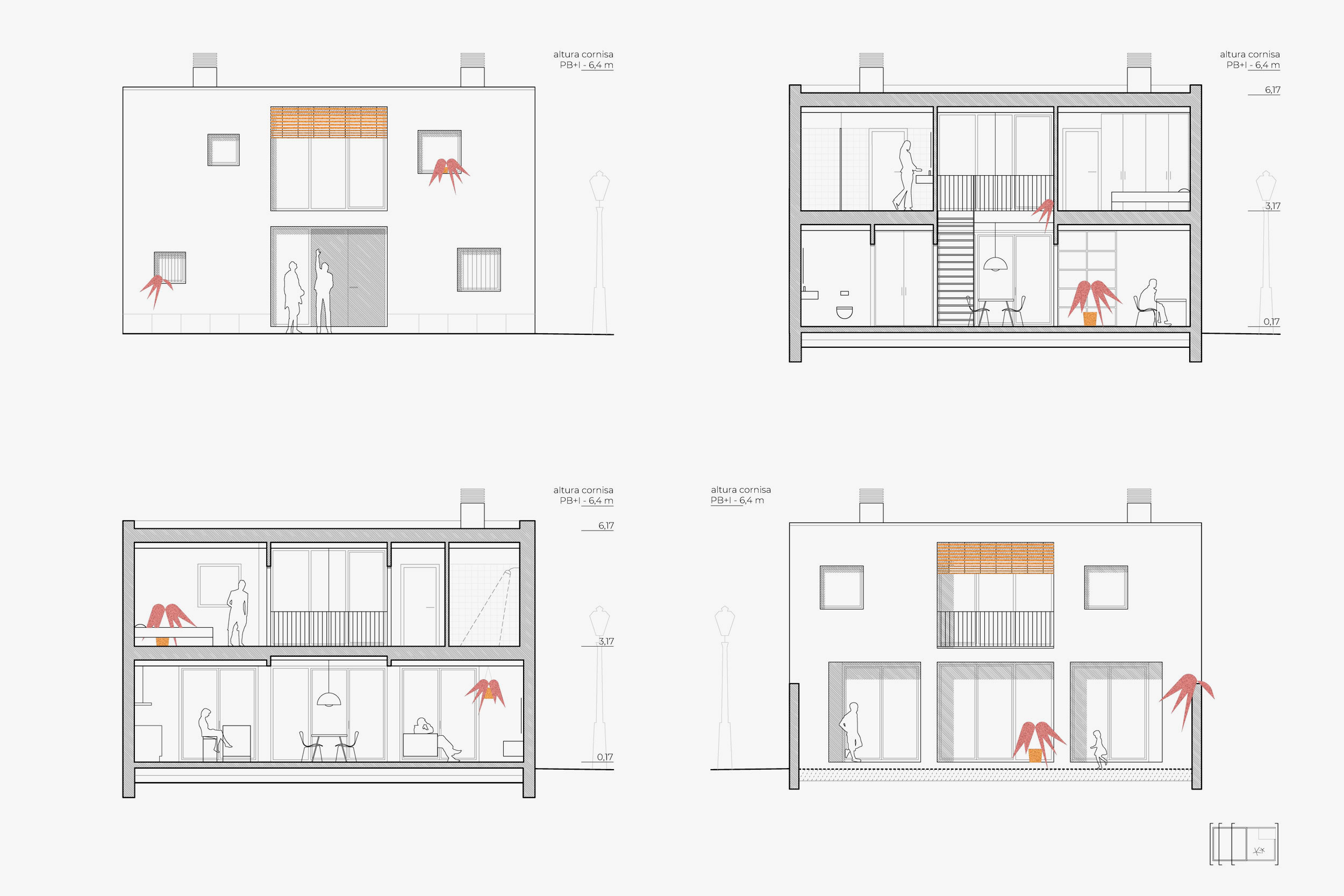 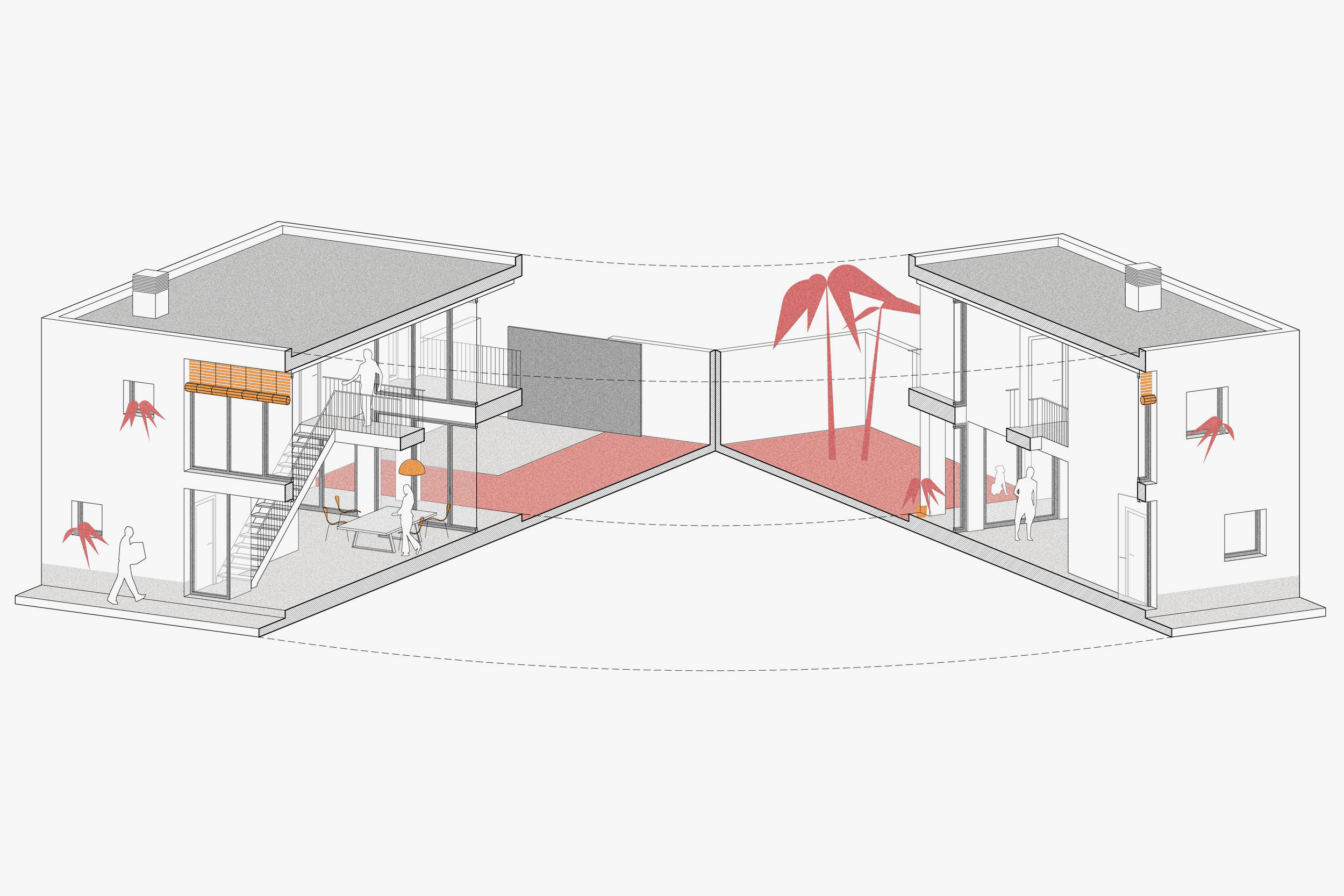 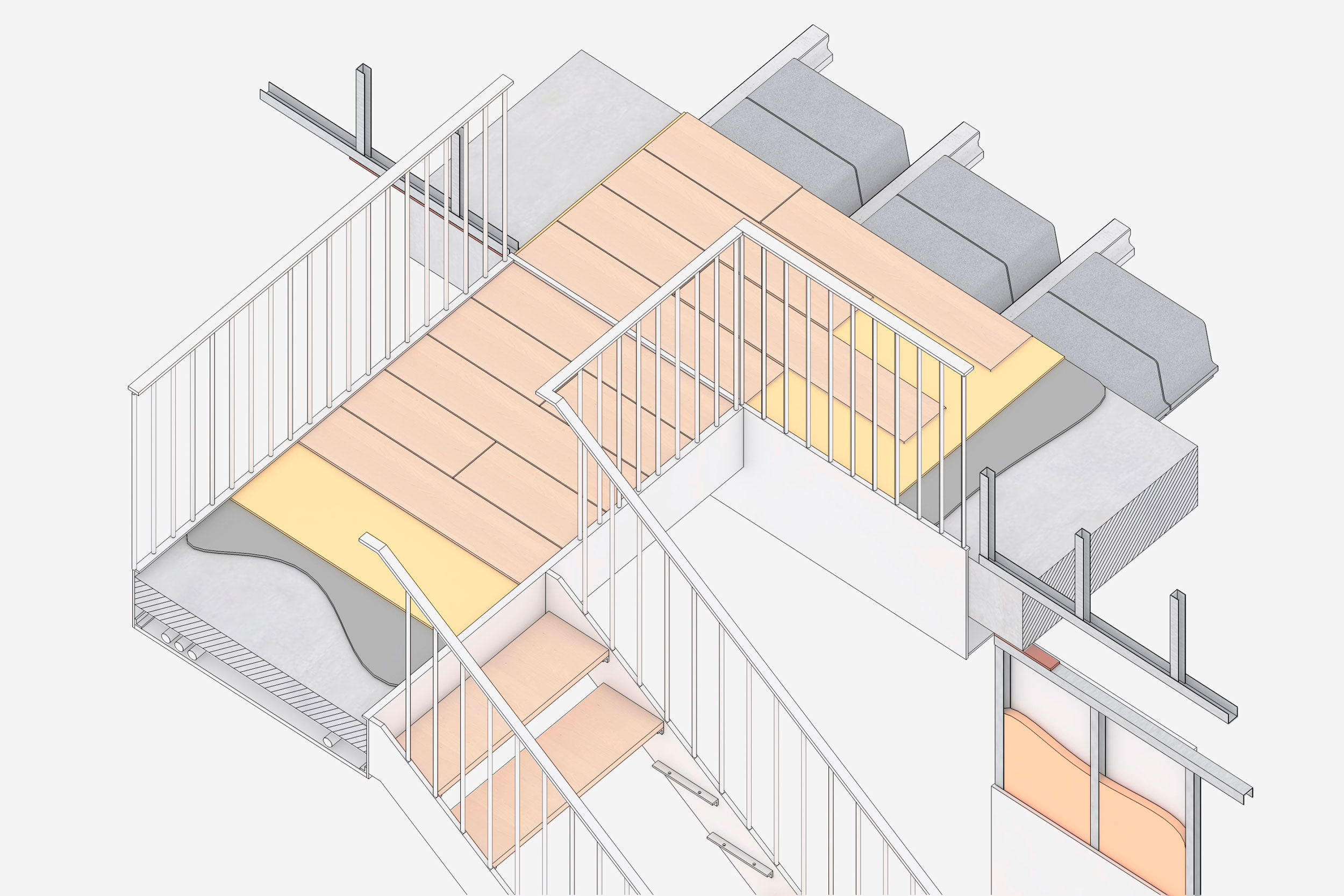 JES House is the story of a project in which the nature of the assignment prevailed over the proposals related to the site. Other factors took over, overpowering the site conditions -environment, orientation, planning- and certain reflections on materiality. The persistence of the developers led us to leave the location-bound ideas aside, one by one, to meet the sole condition of the assignment: to make a contemporary revision of the family home.

A few hundred meters from JES House, the former family house rises with two bays parallel to the façade, with a central access and rooms on the left and on the right. It is indeed inspired on the family’s first house located in the historic centre of Rafelbunyol. The three of them follow the scheme of the traditional Valencian house: a housing volume with rooms on both sides of a central corridor, followed by a patio or corral. This is a very common typology in the settlements with an agricultural tradition and has remained unchanged through the early twentieth century and until today.

True to its referents, the JES House distributes its functional program on two different levels: the ground floor houses the most public uses -kitchen, living room and office- and the privative ones -bedrooms and bathrooms- are on the first floor. Similarly, a series of variations on the traditional typology are introduced. The rooms are subjected to two opening actions: one is carried out in the central bay, allowing a double height in the dining room which houses the stairs to the first floor, and another one from kitchen to the living room through the dining-room, which allows their use in sequence. This double opening, both vertical and horizontal, gives the house a marked visual directionality from the street to the patio and from the living-room to the kitchen.

The resulting volume of the house is blunt but with a great sense of proportionality. There are no excesses, no innovative solutions, just a domestic order brought to scale and the composition. The openings on the façade are tailored to the rooms and threshold spaces, such as the back porch. In the central bay, two large openings stand out, reminding us of country houses with a carriage entrance and revealing the space at double height at the back.

Within the unquestionable containment of JES house, there is a modern reading of traditional materiality. The whitewashing is now a cement plastering, the plinth is ceramic and the carpentry and window sills are metallic. The technique is contemporary but the essence is traditional. All in all, JES house is just that: the last one in a series of family houses both inheriting the constructive tradition of the countryside and reflecting its time.

Any cookies that may not be particularly necessary for the website to function and is used specifically to collect user personal data via analytics, ads, other embedded contents are termed as non-necessary cookies. It is mandatory to procure user consent prior to running these cookies on your website.